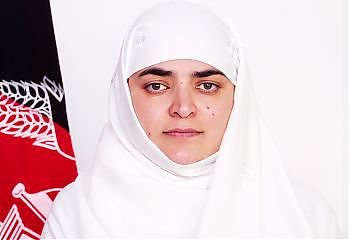 Miss Amina Ahmady has been working for the last ten years with Afghanistan Revenue Department. She received her Bachelor Degree in economics from Kabul University and holds a Master’s degree in Business Administration (MBA) from American University of Afghanistan (AUAF). Furthermore, she attended many international seminars and workshops focused on good governance and tax reforms.
She joined Afghanistan Revenue Department in 2010. In April 2011, she was appointed as Director of Non-Tax Revenue Department (NTR). As NTR Director, she undertook several initiatives to improve NTR collection. She developed a Non-Tax Revenue generation initiative which included reforming of non-tax revenue collection procedures and introduced new sources of revenues in a number of line ministries and other organizations.

As a result of her outstanding performance as NTR director, she was appointed as the Director of Small Taxpayers Office (STO) where she worked for 3 years.
As STO Director, she worked on a number of important projects that resulted in substantial revenue increase. Based on her proven track record in bringing effective reforms in STO, Ms. Ahmady was promoted as the Director of Medium Taxpayers Office (MTO) in October 2015 to bring much needed reforms in MTO to improve transparency in tax collection from medium taxpayers. She had brought significant reforms in the department, which has considerably improved standardization and transparency in tax collection of registered medium taxpayers.
She was appointed as Director General of Afghanistan Revenue Department (ARD) in January 2019. Finally, she was newly appointed as the Director General of Afghan Customs Department Ministry of Finance in the year 2021